When I was thinking about and started to plan Aura Street Market 5-6 year ago I walked around in Stockholm and London.  In Stockholm I visited farmers markets and Street and in London Camden lock market, Sunday Upmarket vid Brick Lane, Old Spitalsfields markets and Portobello market. I got very inspired. 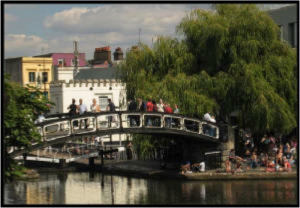 After a couple of years we arranged the first Aura Street market in cooperation with the city of Åbo – Turku. The people working with the first ASM visited Street in May 2008 with the help from Svenska Kulturfonden.

Now I am in Stockholm again and can see how Södermalm and all of Stockholm is lacking and missing Street. Horstull came to live after Street got going and Knivsöder (Knife South – Hornstull was called that before because of all the crime in the area) changed to a bohemian hang out. Street changed the attitude to Horstull and the atmosphere. But luckely Capacabana is still at Horstullsstrand 3, a feminist café with wonderful vegetarian food and interesting program and next door neighbor with Bio Rio, a movie house from the 40s. And there are stores like De Fietsfabriek.