January 6, 2016 · by Ylva Rancken-Lutz · in Film and photo, Good news and fun, Inspiration · Leave a comment

In the interview in Le Monde Dimanche, September 16, 1979, Roland Barthes  reflect on the concept of idleness.

What place do you make—or must you yield—to laziness in your life, and in your work?

At a certain time in my life, I allowed myself, after my afternoon nap, until around 4 or 5pm, a little of this kind of euphoric laziness which doesn’t struggle back.  I used to take up, without getting too tense, my body’s orders, which were just at that moment, a little sleepy, and not very willing.

I didn’t try to work, letting myself go.

But this was during the summer in the country, when I used to do a bit of painting and work around the house like a lot of French people do during vacation.  But back in Paris, I am eaten away by the need to work and the difficulty of working….

…I also experience another form of painful laziness which I would place under Flaubert’s invocation of what he called the “marinade”, meant for those moments when we throw ourselves on our beds to “marinade” or “stew”.  Not doing anything, thoughts turning around and around, a little depressed.

I “stew” often, very often, though it doesn’t last too long now, just 15 or 20 minutes.  Afterwards, I get my courage back.

I believe that, in fact, and here I come back to this theme of “not doing anything”, I suffer from not having the power or freedom to not do anything.  There are moments, however, when I would really like to rest.  But once again, as Flaubert said, “On what shall I rest?”

If you like I am incapable of placing idleness into my life, and even less so, leisure time.  Besides my friends, I only place work or a sort of dismal laziness.

I never really loved sport, and I’m now beyond the age for it anyhow.  What would someone like me do if he decided not to do anything?

To read?  But that’s my work.  To write?  Even more so.  That’s why I used to like painting, as a completely gratuitous, corporal and aesthetic activity, despite it all, being, at the same time, real rest, real idleness, because, not being anything more than an amateur, myself, I wasn’t able to invest any kind of narcissism in it.  Whether well done or poorly done, it was still the same to me.

What else is there?  Rousseau, towards the end of his life, made lace.

We could, without too much irony, beg the question of knitting.  Knitting is the gesture itself of idleness except when we are caught back by the desire to finish the piece.

But convention prohibits men from knitting.

This wasn’t always the case.  A hundred and fifty years ago, maybe even a hundred, men still made tapestries in common practice.  This is, of course, no longer possible today.

The spectacle, and the most anti-conformist thing, and therefore possibly the most scandalous, that I’ve ever seen, scandalous, not for me, but for the others that witnessed the event, took place in the Paris subway, when a young man took his knitting out of a bag, and started ostensibly to knit.  Everyone felt the sensation of a scandal, though no one said it.

Knitting, there’s an example of a manual, minimal, gratuitous activity without any finality in itself, while representing, at the same time, both a truly lovely and successful sort of idleness.

We would then have to find where we might find idleness in modern life.  Have you noticed that we always speak about the right to leisure time but never about a right to idleness?  I wonder moreover if here, in the modern Occident, if not doing anything really exists. 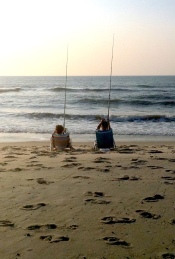 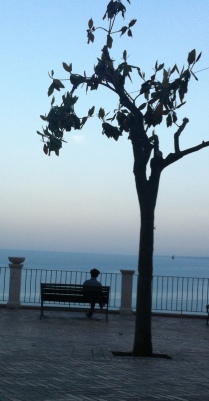 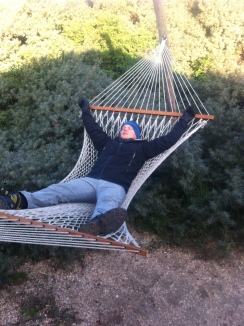 Even those people who have a completely different, tougher, more alienated and laborious, life than my own don’t do “nothing” when they’re free.   They always do something.

I remember this image:  of being a child, a teenager, when Paris was different.  This was before the War.  The summers were hotter, certainly hotter than now as everyone believes, or at least, me, I do believe it.  Very often, the Parisian concièrges, at the time an institution, came out with their chairs during the evenings, propping them in front of their doors to sit without doing anything.

This is, of course, a vision of laziness that has been completely eliminated, and which I no longer find in contemporary life;  in today’s Paris, there aren’t many gestures of laziness.  A café is nonetheless a relay point with conversations and an “appearance” as well.  This is not true idleness.

It is likely that, now, laziness consists in, not in not doing anything, since we’re incapable of that, but rather in cutting apart time as often as possible, and in diversifying it.  It’s exactly what I do on my own small scale when I introduce different diversions into my work.  I cut apart time.  It’s really a way of making myself idle.  I aspire, however, to another idleness.

A Zen poem, dazzling in its simplicity, might just be this definition of this laziness I dream of:

The poem such as it is translated in French introduces a remarkable example of an anacoluthon into the text, that is, a rupture in construction.  He or she who is seated peacefully is not the subject of the sentence.  It isn’t springtime that is seated.  This rupture of construction, whether desired or not, indicates that, in the situation of idleness, the subject is almost dispossessed of his consistence as subject.  Once decentered, saying “I” isn’t even possible.  Now that would be true idleness, managing, in certain moments, to no longer even have to say “I” (Read the whole article).