Bernie Sander’s land is my land

I often think of “my US” as a bubble in an otherwise quite hostile and frightening American society. But now and then I find that my American subculture can be described more like a greenhouse where great ideas and wonderful innovations prosper and slowly find their way into American mainstream society.  Bernie Sanders represents my greenhouse America and I am amazed and overwhelmed that a guy like got almost 50% of the votes in the primary election in Iowa!

Bernie Sanders is an interesting fellow. In 1987, while he was a mayor of Burlington, he recorded a folk album with thirty Vermont musicians and singers. Sanders chose the music himself: five protest songs from the fifties and early sixties. He preform the songs more like raps or sound poetry. 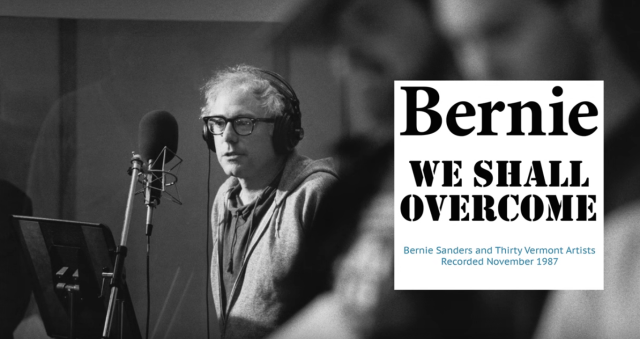 Bernie Sanders was born in Brooklyn (September 8, 1941) and has worked as a carpenter and a filmmaker and has a degree in political science from the University of Chicago. Sanders is the longest-serving independent in U.S. congressional history and is now a candidate for the Democratic nomination for President of the US. While a student in Chicago he was a member of the Young People’s Socialist League and an active civil rights protest organizer for the Congress of Racial Equality and the Student Nonviolent Coordinating Committee (wikipedia).

In 1981, he was elected mayor of Burlington as an independent and was reelected three times. As mayor, Sanders helped the city make major policy changes in affordable housing, progressive taxation, environmental protection, childcare, women’s rights, youth programs and the arts (read more).

In 1990, he was elected to represent Vermont’s at-large congressional district in the U.S. House of Representatives. In 1991, Sanders co-founded the Congressional Progressive Caucus. He served as a congressman for 16 years before being elected to the U.S. Senate in 2006. In 2012, he was reelected with 71% of the popular vote. In Congress, he has fought for working families, focusing on the shrinking middle class and growing gap between the rich and everyone else.

Sanders views on income inequality, universal healthcare, parental leave, climate change, civil rights and LGBT rights are seen as progressive in the US. He promotes a social democracy he calls a Nordic model. Below you can see Sanders defending this model to a skeptical and condescending Anderson Cooper in the first Democratic debate in 2015.

Sanders is also critical of U.S. foreign policy and was early on an outspoken opponent of the Iraq War. He has also been criticizing the racial discrimination in the criminal justice system and US mass surveillance policies. In the presidential election 2016 Sanders is speaking for a fair and humane immigration policy and writes on the campaign homepage:

The American far right’s “family values” are scary to many and can even be a reason for not wanting to raise children in the US. Sanders believes that the American right has claimed the mantle of “family values” for far too long:

When my Republican colleagues use the term they’re usually talking about things like opposition to contraception, denying a woman’s right to choose, opposition to gay rights, and support for abstinence-only education. Family values: let’s talk about what those words mean.

When a mother can’t spend time with her newborn child during the first weeks and months of life, that is not a family value.

When a husband can’t get time off from work to care for his cancer-stricken wife, that is not a family value.

When a mother is forced to send her sick child to school because she can’t afford to stay home, that is not a family value.

When parents and children can’t spend any time on vacation together during the course of an entire year, that is not a family value.

In fact, these things are an attack on everything the family stands for.

Workers and families in every other major industrialized country in the world get a better deal than we do here in the United States.

That’s wrong. It’s a travesty. And it should be an embarrassment to anyone who claims to speak for family values in this country.

In 2016, Vermont’s music community came together once again to show support for Sanders’ campaign for presidency and the positive message of Woody Guthrie’s song This land is your land. The musicians point out the genuinely positive effect that Sanders has had on the town of Burlington and the state of Vermont. It is not hard for me to imagine what he could do as president of the US! 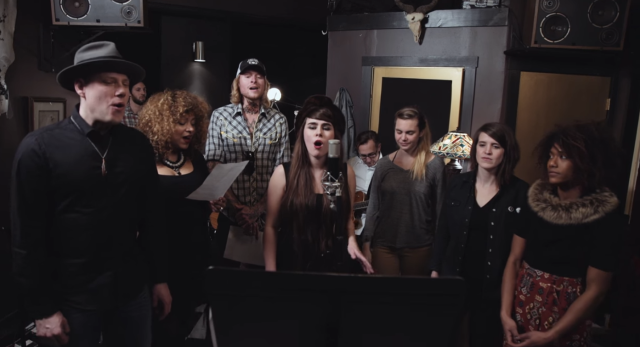